Senkox Technologies Inc. is committed to providing advanced, industry-leading technology to monitor the temperature status of various applications. With the rise of clean energy and renewable energy sources, Senkox has developed systems specifically to monitor battery banks and charging stations.

A Battery Energy Storage System (BESS) stores electric voltage energy inside of specially developed batteries. The energy is generated by solar panels, wind farms, and other green technologies. The stored energy can then be used later to power anything from residential homes to electric vehicles.

Battery Energy Storage Systems (BESSs) are a sub-set of Energy Storage Systems (ESSs). An ESS typically contains several primary components, including the battery/power, monitoring and control systems, and a power conversion system. The development of ESSs has opened the doors to the integration of renewable energy. Solar and wind farms can use ESSs to store electric charge as well as optimize energy efficiency. 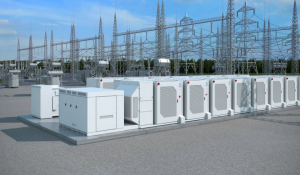 A fire outbreak in a BESS is far more extreme than the usual fire risk posed by batteries because of the size, complexity, energy, and density of the systems and the Lithium-ion (rechargeable) battery chemistry involved. These factors contribute to significant fire risks in battery farms, electric vehicles, electric vehicle charging stations, and more.

Possible fire hazards for battery storage include mechanical abuse (crushed, punctured, submerged), thermal abuse (overheating) or electrical abuse (short-circuit, overcharge, rapid discharge). Aside from physical or electrical factors, overheating can also be triggered by external high temperature. The greatest concern for fire outbreak or even explosion is when overheating results in a process called thermal runaway. Thermal runaway is a reaction within the battery causing internal temperature and pressure to rise at a quicker rate then can be dissipated.

Thermal runaway in a battery cell.

During a short circuit inside the battery, flammable electrolyte gases will begin to discharge rapidly. Then the battery separator breaks down. From there, the battery undergoes a violent temperature rise which may lead to risk fire. Once one battery cell enters thermal runaway, it generates enough heat to cause adjacent battery cells to also enter thermal runaway. This produces a fire that repeatedly flares up as each battery separator ruptures in turn. 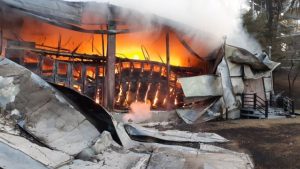 One of the most concerning issues surrounding a BESS fire is that it cannot be treated like a “normal” fire due to its burn characteristics and toxic byproduct. Should an outbreak occur, specific extinguishing interventions will be required to contain the fire. Thus, early-detection and prevention is best for this application.

In order to monitor the client’s cabinets storing batteries, a linear heat monitoring system was needed. The most effective way to avoid fire outbreaks in BESSs is to detect the abnormal overheating, or hotspots, along the battery cells of BESSs. Senkox HSD™ Linear Heat Sensors (LHS) is an ideal solution to continuously measure accurate temperature in real-time. The sensor is intrinsically safe because it neither creates nor stores energy, making it apt for battery cell monitoring. With proper fire detection and protection, battery storage explosions can be greatly minimized.

For this case study, Senkox HSD™ Linear Heat Detection System was installed in four cabinets, each holding several batteries. A total of 4 Senkox linear heat cables and one DAQ module were installed. The sensors were installed horizontally in a U-shape on the top of each battery and then connected with the DAQ module. 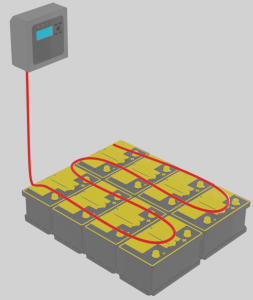 Each cabinet had three sections, and one sensor was placed per each section. The Senkox HSD™ Linear Heat Sensor senses temperature variation at every point along its entire length. Each sensor will measure the temperature of each section in real-time and will trigger the alarm in case of temperature rise. Should any unusual temperature increase occur, the user will be able to take action before thermal runaway spreads to each cabinet because Senkox cable monitors the real-time temperature and rate-of-temperature-change.

Wireless Transmission: Each Senkox DAQ module can be easily integrated with any centralized control room, DCS/SCADA system or fire suppression system. The data from each module can be transmitted to other systems either serially or wirelessly. For this client’s project, wireless transmission was needed between the control room and the DAQ module.

For wireless communication, a transmitter allows the DAQ module to transmit the data over 1 kilometer away. A receiver is placed to the control room in order to receive the wireless signal from the DAQ module. The receiver module can be connected to any control room system using an RS-485 to USB cable. A wireless transmission makes it effortlessly easy for the client to monitor the BESS cabinets from the control room.

Fire protection is of the highest importance in BESSs due to the thermal runaway reaction that causes overheating to spread from battery to battery. Additionally, a fire outbreak among lithium-ion batteries is extremely difficult to extinguish once the fire has begun. The Senkox HSD™ Linear Heat Sensor allows the client to monitor the four BESS cabinets for any hotspots in real-time and ensures that any rise in temperature will be addressed before overheating turns into an explosion. The Senkox solution works to protect the cabinets from the ever-prevalent dangers of thermal runaway, but more importantly, to keep the people near the BESS safe from fire.