Senkox Technologies Inc. has completed various different cable tray monitoring projects for over two decades. In this case study we will examine a completed project, the requirements of this project, and how the Senkox System was installed.

Metro and railway networks use a wide array of cabling solutions, from power cables to signaling and communication cables. Together, these extremely thick, insulated cables provide power distribution, control, and communication. Without this cable network, a Metro Station could not serve the millions of passengers and goods transported every day. 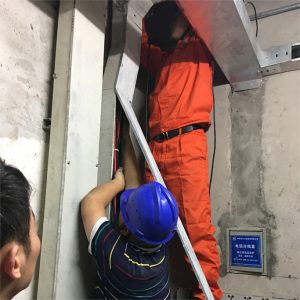 Fire protection is a serious and life-threatening concern for any Metro Station due to the extensive amount of cables operating throughout the facility. Fire outbreaks are caused by short-circuits, sparks, and overheating, as well as the build-up of combustible dust and debris. Over time old cables need to be removed and new cables added as aging cables present yet another fire hazard. 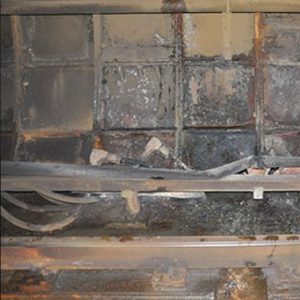 Damage in a Metro Tunnel at L’Enfant Plaza station

Once a fire starts it can quickly spread along the cables. And fire is not the sole concern: during a fire outbreak, smoke fills the Metro, poisoning and sometimes even killing passengers. Additionally, the fire damage leads to lengthy downtime in order to repair and replace the systems. The destruction of property combined with inability to distribute necessary operating power within the Metro Station ultimately results in substantial monetary loss. With proper fire detection and protection, destruction and tragedy can be greatly minimized.

In order to monitor the cable trays powering the Metro Station, a linear heat monitoring system was needed. In the walls and underneath the tracks, The Senkox HSD™ Linear Heat Sensor solution is monitoring the real-time temperature of the cable trays.

Every day, the trains start early in the morning, creating a large electrical surge within the Metro’s cable network. Conventional linear heat detectors are sensitive to electromagnetic interference (EMI). Thus, the electrical surge generated by the trains starting frequently causes false alarms in conventional linear heat sensors. The Senkox HSD™ Linear Heat Sensor is an ideal solution because daily electrical surges will not cause any false alarms to the EMI resistant cable. The Senkox system also features a fault alarm, which alerts the user of an issue without triggering a false fire alarm and the suppression system.

For this Metro Station, the user had installed a fiber optic distributed temperature sensing system to monitor the cables for hot spots. Fiber optic cables are commonly used in cable trays because the cables can monitor very long distances, provide real-time data, and are EMI resistant.

However, the fiber optic solution became a tangled mess when maintaining the power cables by adding and removing new ones as needed. Fiber optic cables come at a very long, fixed length that cannot be trimmed after being installed. This disorganization made it increasingly harder to maintain the cable tray. Additionally, fiber optic cables are quite fragile, and moving power cables in and out of the tray risked damaging sensor cable. The whole line of sensor must be replaced if some of the sensor is damaged, and then the system must be calibrated again. 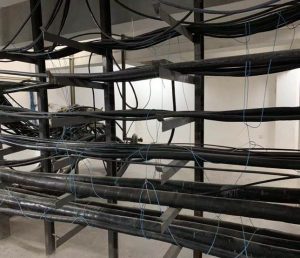 The Senkox HSD™ Linear Heat Sensors are an ideal solution to monitoring the power cables that overcomes the disadvantages of fiber optic because it can be trimmed to fit each cable tray. The Senkox HSD™ Linear Heat Sensors also overcomes the disadvantages of conventional linear heat solutions because conventional cable’s sensitivity to EMI would cause false alarms in the Metro. The Senkox system ensures easy, convenient, and continuous monitoring so the Metro may continue to operate without interruption or worry.

The Senkox HSD™ Linear Heat Sensors are installed on top of power cables in the cable tray. Should any unusual temperature increase occur, the user will know because Senkox cable monitors the real-time temperature and rate-of-temperature-change (and some sensors also feature the detection of the hot spot’s location and size). The HSD sensors are mounted in a serpentine wave along the tray to maximize coverage.

A custom DAQ module was created by Senkox to meet the needs of this Metro Station project. The user needed a module that could handle the strong vibrations created by the trains running. The fire protection system would be monitored from a central control room, so the DAQ module did not need the typical LCD screen and buttons used to set the alarm. Taking these needs into consideration, Senkox designed and provided a DAQ module in a vibration proof box and connected the system to the large control room via a communication cable. 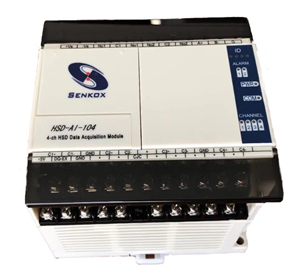 Monitoring Software: The cable tray can be monitored online through the Senkox Utility application. Our Senkox Utility application is a software which allows the user to monitor the system in a control room or on a personal computer. It displays the temperature and the rate-of-temperature-change by zone. These values are represented numerically and graphically, allowing the user to see any temperature fluctuation. Thus, potential fire outbreaks can be addressed when temperature fluctuations begin. Should a fire occur, the Senkox Utility will display continuous data to assist personnel in the firefighting process. 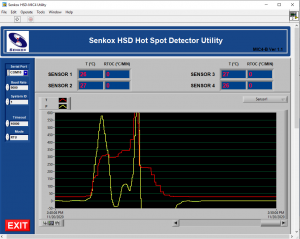 The Senkox HSD™ Linear Heat Sensor allowed the Metro Station to monitor the cable tray for any hotspots in real time, and ensured that any rise in temperature would be swiftly addressed. The user switched to the Senkox HSD™ Linear Heat Detection System to protect the cable trays without the fragility or disorganization of a fiber optic system, nor the false alarms of a conventional linear heat system. The user was very satisfied because they can now easily make changes to the power cable system. Additionally, the flexibility and durability of the Senkox system ensures that any and all hotspots will be detected despite strong vibrations and powerful energy surges. The Senkox solution takes long-term maintenance and environmental factors into consideration, but most importantly, the lives of the people travelling throughout the Metro Station.