Senkox Technologies Inc. is committed to providing advanced, industry-leading technology to monitor the temperature status of various applications. Coal storage and conveyor systems have a risk of spontaneous combustion, which the Senkox system can help mitigate.

Conveyor systems are used to transport coal, granular carbon, and other often combustible materials from one area to another. Conveyor systems use conveyor belts, which are rolls of fabric or rubber pulled by motors along roller bearings to transport the material. These conveyors often run very long distances, requiring a multitude of roller-bearings to move the belt along the track.

Conveyor belts bearings can operate at very high speeds for several hours on end, which can cause ignition from the intense friction of prolonged use. Friction due to the movement of the belt can pose a serious fire risk, especially if the materials being transported are heated or ignited atop the conveyor. Fire typically occurs when dust build-up is unexpectedly ignited by mechanical friction heat. A fire can spread quickly when undisturbed piles overheating material are unknowingly transported through the conveyor system. 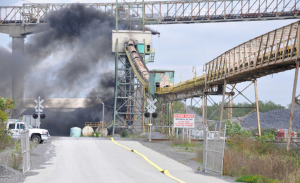 Fire outbreak on a conveyor system at a cement plant.

If a fire outbreak does occur, the conveyor must be shut down immediately to mitigate the spread the fire throughout the facility. A major concern faced by conveyor systems is the large amount of dense, toxic smoke emitted from the burning belts. This problem can be particularly serious because the thick smoke reduces visibility, and the toxic fumes make breathing difficult. If the conveyor system is located in an underground mine, the toxic smoke is trapped inside and greatly increases the danger for the conveyor workers. The destruction of the manufacturing plant combined with shutting down production ultimately results in substantial monetary loss. With proper fire detection and protection, destruction and tragedy can be greatly minimized.

The Senkox HSD™ Linear Heat Sensor detects the real-time temperature measurement in order to detect early abnormal temperature conditions and trigger the alarm before the fire becomes a serious disaster. The most effective way to avoid fire and toxic smoke hazards is to install a linear temperature monitoring system along the conveyor belt, as well as other areas of potential fire outbreak such as rollers and motors. This safety system also provides the flexibility to set multi-level alarms to trigger the sprinkler as well a Fault Alarm, which alerts the user if the monitoring system is experiencing a connection problem rather than triggering a false alarm. 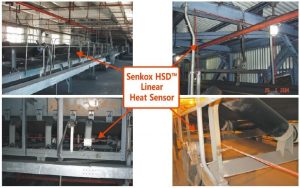 The Senkox HSD™ Linear Heat Sensors were installed along the conveyor belts of the conveyor system. Should any unusual temperature increase occur, the user will know because Senkox cable monitors the real-time temperature and rate-of-temperature-change (and some sensors also feature the detection of the hot spot’s location and size). 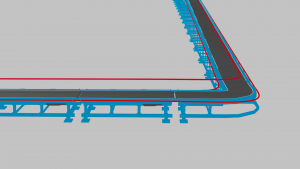 For this installation, eight Senkox Linear heat sensors in total were used to monitor both sides of the conveyor. Having eight individual sensors allowed the end-user to divide the entire monitoring area into eight different zones. Two Senkox DAQ (Data Acquisition) modules were used. Up to four sensors can be connected with one DAQ module, thus by pairing eight sensors with two modules, this installation efficiently maximized Senkox’s technological capabilities.

Each DAQ module was secured 25 meters from the opposing sides of the conveyor system’s monitoring area. The length of the sensor can be adjusted depending on the location or monitoring zone.  A sensor with a maximum length of 200m can be mounted in one zone to monitor the real-time temperature. The sensors connected to the DAQ Module can be the same or different lengths.

Extension cables were also used to connect the sensor away from the DAQ module. Flame retardant zip-ties were used to position the sensor in the desired area near the roller bearings.

The Senkox HSD™ Linear Heat Sensor allowed the end-user to monitor the conveyor system of any hotspots in real time, and ensured that any rise in temperature would be swiftly addressed. The Senkox HSD™ Linear Heat Detection System is able protect the conveyor belts even in harsh environment of a marine vessel. The user was very satisfied because the low-maintenance safety system can repair any damaged sections of cable without having replace the entire system. The Senkox solution takes long-term maintenance and environmental factors into consideration, but most importantly, the lives of the people traveling onboard the marine vessel.